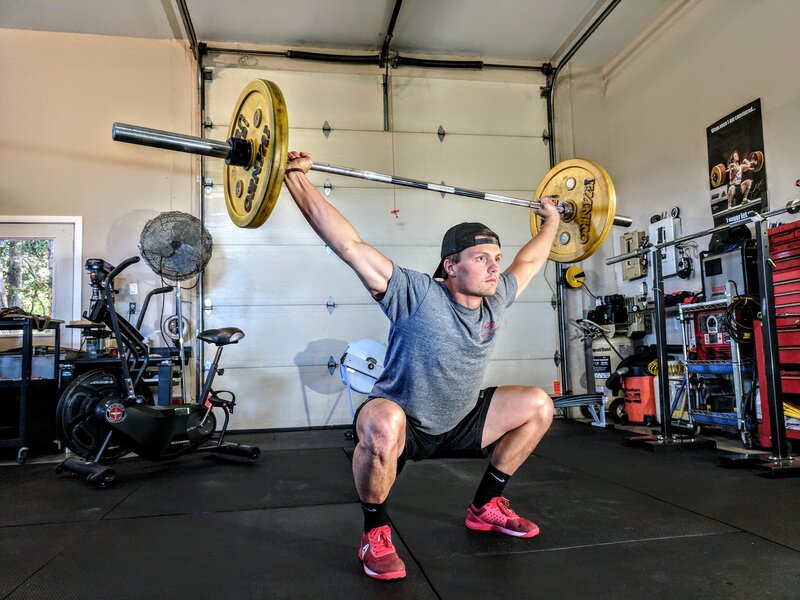 For this article, I’ve put together some quick-fire answers to frequently asked weightlifting questions, covering topics from training through to equipment, terminology and lifting safely.

Let’s get started, shall we?

What’s the difference between weightlifting and bodybuilding?

Bodybuilding is the first type of training that most people do by default when they first enter the gym, it is training aimed at increasing muscle size, improving muscle symmetry and overall aiming to look good.

Weightlifting, also sometimes referred to as olympic weightlifting or oly lifting, is training with the aim of lifting the most weight possible in two very specific lifts: the snatch, and the clean & jerk.

What’s the difference between weightlifting and powerlifting?

Weightlifting and powerlifting are both strength sports that involve moving a heavy barbell from point A to point B.

In powerlifting, the three main lifts are the back squat, bench press and deadlift.

In weightlifting, the two main lifts are the snatch and the clean & jerk.

Practically, the sports share a lot in common in terms of their training methods and exercise selection, for example, weightlifters will also regularly squat, as well as performing deadlift variations.

The major difference between the two sports is that weightlifting requires additional physical characteristics, such as additional mobility, technical coordination and speed-strength, i.e. the ability to move heavy things very fast.

What are the main benefits for athletes learning to weightlift?

Weightlifting movements and their variations are great for developing lower body power and the ability to produce force quickly.  As an athlete, this translates into higher jumps, faster sprints and quicker acceleration times.

Practically, they’re also very useful as they’re both measurable and micro-loadable, so you know exactly how much stress you’re putting on your body, and you can adjust very precisely in a way that just isn’t possible with alternative power development methods such as plyometrics.

Some coaches never use the olympic lifts because they argue that they’re too hard and time-consuming to learn.  Other coaches think they’re the best thing since sliced bread.  Personally, I’ve found that the reality lies somewhere in the middle.

The olympic lifts are fantastic tools for lower body power development, and I’ve used them successfully to push high-level karate and taekwondo fighters into medal-winning positions.  However, these were not absolute newcomers to the gym, they had a solid training base and knew how to front squat, overhead squat, deadlift and overhead press with great form.  They also had decent mobility and good motor skills, so the olympic lifts were appropriate choices for them at that time.

On the other hand, when I was working with groups of twenty or more talent pathway swimmers aged 11 to 16, the last thing I wanted to do was give them heavy barbells and tell them to throw them overhead.  They simply didn’t have the necessary base of strength or motor skills to use the olympic lifts safely.  Plus, even if they did have the skills the environment didn’t allow safe practice or focused coaching.

As a coach, you have to consider the environment, the athletes and the goals of your training, and use that information to decide whether or not the olympic lifts are a good idea in your programme.

How to get into weightlifting?

Due to it’s technically demanding movements weightlifting can seem a bit daunting to get started with.  If you’re interested in giving it a go, here’s what I recommend…

1) Spend a few weeks training as you normally do, but adding a 10 to 15-minute mobility based warm-up beforehand, plus 10 minutes of targeted stretching afterwards.  What we’re aiming to do is increase your range of motion so that you can achieve key weightlifting positions.

3) After a few weeks of following steps 1 and 2, you’ll be ready to practice the movements themselves.  The simplest and quickest way is to hire a coach, however, since that’s not an option for everyone’s budget, I recommend that you follow what’s known as a top-down approach.  Start with easier variations such as the high hang snatch and high hang clean, getting used to the movements and gradually moving your start position closer to the floor.

How long should a weightlifting session be?

Weightlifting sessions tend to be between 60 and 120 minutes long, depending on the goals of the session and the amount of work required.

Because of the time required for warming up, mobilising and building up in weights, there’s very little point in having weightlifting sessions shorter than about 45 minutes.

And because of the build-up of fatigue, plus generally having a job, life and other commitments, anything over 120 minutes becomes unrealistic.

What does a PR mean in weightlifting?

In weightlifting a PR, or personal record, also sometimes called a PB or personal best, is the maximum weight you’ve lifted for a given movement.

So you might have a snatch PR, a clean & jerk PR, and even PR’s for assistance movements like a PR front squat or PR back squat.

What does RM mean in weightlifting?

In weightlifting, RM means repetition max, and is the maximum amount of weight that you can use to achieve a given number of reps.

For example, if your programme calls for you to hit a 5RM, you would work up to find the heaviest weight that you can complete 5 reps with.

Or if your programme calls for you to hit a 10RM, you would work up to find the heaviest weight you can complete 10 reps with.

When to use a weightlifting belt?

Within the sport of weightlifting belts are actually 100% optional, and a lot of international level competitors don’t use them.

For those that do use them, best practice is generally to use them for heavier lifts, typically squats, pulls and cleans above 80% of 1 rep max.  It’s best not to use a belt for snatches, as it tends to get in the way.

With that said, there are guidelines as to the thickness and type of belts allowable in competition, so make sure to do your research first.

How heavy is a weightlifting bar?

There are two weightlifting bar types…

The difference is due to women’s bars being slightly thinner, a design that allows for female competitors to maintain a full hook grip on the barbell.

Where to buy chains for weightlifting?

Chains on a squat, bench or deadlift might have some utility for training, but chains on a snatch, clean or jerk is just a really quick way to injure yourself.

How to spot weightlifting moves

Unlike with movements such as the squat and bench press, there is no way to safely spot someone performing a snatch, clean or jerk, and attempting to do so would likely be far more dangerous than helpful.

Instead, you should learn how to safely bail from failed weightlifting movements, as demonstrated here.

Where to buy weightlifting shoes

I’m sure you’ve noticed those fancy weightlifting shoes with the firm sole, wide base and raised heels.  The problem is that because weightlifting is still quite a niche sport, you don’t tend to find them in most sports stores, so your best bet is to look online…

There are also some great smaller brands and makers, but make sure to do your homework and read plenty of reviews first. For more, check out this article reviewing the best weightlifting shoes.

If there’s anything else you want to know, feel free to leave a question down in the comments and I’ll get back to you as soon as possible.