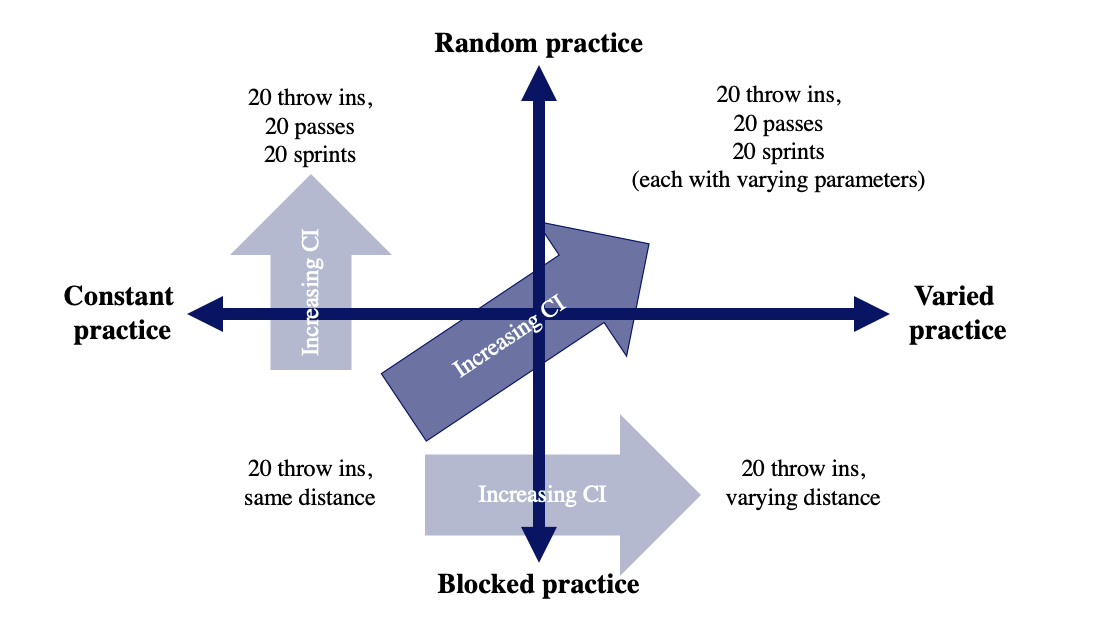 As athletes, coaches and sport scientists we are interested in any factors that can speed up skill acquisition. Contextual interference is one factor that has been shown to accelerate motor learning. In this article we’ll explain contextual interference, discuss how you can apply it in practice and explore the theory behind this effect.

What is contextual interference?

This effect was first seen during a word learning task in the 1960s, and was further demonstrated when learning movements in the late 1970s. You can find a full historic review of the contextual interference effect here.

Why is the contextual interference effect useful?

This effect is counterintuitive, as we tend to associate better practice performance with athletes learning more. Whereas, the contextual interference effect tells us that this may not always be the case. By adding in more practice variability, we challenge the athlete, they make more errors, but this seems to create a longer lasting change in performance (increased learning).

What is contextual interferences & practice variability?

Here is where both students and coaches can get confused. There are two continuums along which we can add practice variability and contextual interference (CI) into our practice. Historically, this small detail hasn’t been explained very well in the literature.

The classic CI effect involves adding in new tasks to practice. We call this scale blocked to random practice. In the example below, we’ll use a footballer practicing her throw ins.

Blocked practice (bottom left corner) would be her completing 20 throw ins in a row, this practice would be deemed to have no contextual interference. As we move up the left hand side we are adding in different tasks. An example would be 20 throw ins, 20 passes and 20 sprints all carried out in a random order (top left corner). This would be called random practice and be considered to have higher levels of contextual interference.

The second scale sees us move left to right across our grid, from constant to varied practice. If we are being pedantic we could call this adding practice variability, but CI studies seem to use this continuum too for exploring the CI effect.

In the bottom left corner our footballer would be practicing all her throw ins to the same target, we call this constant practice. As we move to the right we can add variability into the task, one example would be to vary the distance of her target, but we could vary direction too. We would call this varied practice.

Using this grid you can start to see that we can describe practice using both these scales:

It is important to note that, in reality, these are sliding scales, rather than four separate types of practice. However, understanding how to manipulate practice along these two scales can be very useful as a coach and athlete.

What is optimal for learning?

It should be noted that the majority of the research has taken place with beginners learning simple, closed skills and despite results being statistically significant, some researchers have questioned the effect size and usefulness of such findings.

This finding suggests that we should start coaching beginners using constant-blocked practice, then slowly introduce more varied or random practice as they progress.

What causes the contextual interference effect?

Historically, the contextual interference effect has been explained from a cognitive standpoint. Every sports task requires a level of understanding and planning. By mixing up tasks during practice the athlete has to plan, forget and re-plan each time, this is not required when carrying out the same task over and over again (constant-blocked practice). This theory is called the forgetting-reconstruction hypothesis.

A similar, but slightly differing theory is called the elaboration hypothesis. Whereby mixing up tasks creates more distinctive memories between reps and induces better retention in our long term working memory. Some studies have attempted to confirm these theories using electrophysiology data, but there is some way to go before we properly understand the neural workings behind this behavioural effect.

Check out this chapter for more around theoretical underpinnings and contemporary issues surrounding the contextual interference effect.

Based on the evidence to date, it appears practice variability can result in slightly worse practice performance, but better retention and transfer of sporting skill. There is further evidence to indicate systematically increasing contextual interference could be the best approach when coaching beginners.

The size of the effect is still under debate and there is still limited data on this effect within elite performers. Further research is also needed to understand the neural working that underpins the contextual interference effect.

For more insights into practice structure check out this article on massed vs distributed practice.