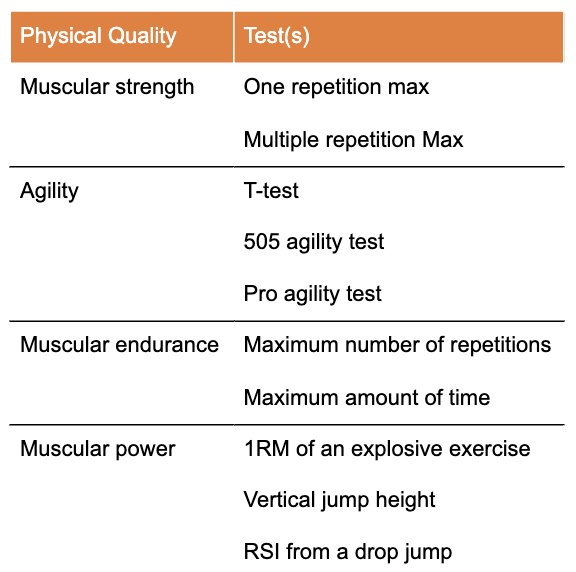 As coaches, we must choose, administer, analyse and interpret tests appropriately and effectively in order to monitor athletes progress and implement effective training programmes, which will optimize their physical development and preparations.

In this article, we’ll highlight physical tests which can be used to measure athletes’ physical qualities, which are also called their components of fitness.

How to test muscular strength

Muscular strength is the ability of a muscle to exert a force against a load and overcome resistance. The most reliable and accurate way to measure muscular strength is in a lab, using force plates and performing a movement like an isometric mid-thigh pull. This allows us to get an exact force measurement in newtons. However, for most people this isn’t an option, so we have to use indirect measures.

An indirect way we can measure the maximum force a muscle or group of muscles can exert in one maximal effort, is by measuring the maximum amount of weight they can lift in one repetition, which is known as their one-repetition max (1RM).

Whether you decide to use a 1RM or multiple RM test, it’s important that correct technique is maintained throughout the lift(s). The lift you choose should be determined by what muscle(s) you want to test and which lift meets that criteria. For example, If I’m working with a group of rowers and I want to test their lower limb bilateral maximum force production, I may select the barbell back squat as my lift as it allows me to measure that physical quality.

How to test agility

Agility is “a rapid whole-body movement with change of speed or direction in response to a stimulus.” Despite this definition and the names of the tests that will be mentioned below, most agility tests don’t require an athlete to respond to a stimulus. Instead, the movements are pre-planned and the athletes know exactly what to expect.

How to test muscular endurance?

Muscular endurance is the ability to produce and sustain muscle force over a certain period of time. A muscular endurance test should therefore be conducted over several seconds to minutes and be continuous without rest periods.

One approach you might take to this, is performing the maximal number of repetitions of a certain exercise using a fixed load (i.e. the athlete’s body weight or a percentage of the athlete’s 1RM). For example, the maximum number of press ups, inverted rows, or chin ups.

Muscular endurance tests should be completed until technical failure, gross movement deviations or when the athlete decides to stop.

How to test muscular power?

Power is the ability to exert a large amount of force quickly. This means there are two components that reflect the output power – force and velocity.

Tests that can be used to measure muscular power include a 1RM of an explosive exercise such as the power clean or snatch or measuring vertical jump height or reactive strength index (RSI) from a drop jump. These tests should be completed with maximum intent and speed, whilst maintaining correct technique.

It’s important to remember that two athletes may have the same power output, but the components that reflect the output of power (force and velocity), may be very different. For example, one athlete may exert a large amount of force slowly whereas another athlete may exert less force at a much greater velocity, yet they still have the same power output. It may therefore be useful to look at your athlete’s power profile on a force-velocity (F-V) curve.

How to test aerobic capacity?

Aerobic capacity, also known as cardiorespiratory fitness or maximum oxygen uptake (VO2 max), is the maximum amount of oxygen the body can use during maximal intensity exercise. This can be measured directly by a VO2 max test, however this requires sophisticated equipment, technical support and is costly.

We can also use indirect measures in the field to estimate aerobic capacity, these include a 1.5 mile run, 12-minute run, yo-yo intermittent recovery test and the maximal aerobic speed test. These tests are much less sophisticated, require minimal equipment and are cost-effective, however they are predictive using equations based on the test results, so they are subject to error.

How to test flexibility?

Flexibility is the range of movement in a joint or series of joints. We can use specific equipment to help us measure flexibility at certain joints, for example…

A goniometer is a plastic instrument that allows us to measure angles at most joints individually, including the ankle, knee, hip, shoulder, elbow etc.

For example,  ALTIS, an elite training centre that has coached over 100 Olympic athletes and world champions, conducts a visual movement screening (which Dan Pfaff from ALTIS calls a “system analysis”) of each of their athletes during every warm-up. They look at how their athletes move, their body posture and body language. They know exactly how their athletes normally move and behave so if they observe anything out of the athletes “normal”, they can address it within their session.

ALTIS’ approach could be adapted and used within your own sessions depending on your environment and situation. In S&C, we might include an overhead squat with a dowel within the warm-up which would allow us to assess an athlete’s flexibility and mobility in their shoulders, thoracic, hips, knees and ankles.

​​We can also take videos or pictures of ourselves in certain stretches, and compare the positions over time.

How to test balance and stability?

Balance and stability are different concepts but related.

Stability is the measure of the ability to return to the desired position after moving out of balance. For example, if a defender tries to push you off the ball, it’s your ability to remain upright or in the optimal position.

Factors to consider when testing

To maximise the reliability and validity when conducting testing, there are several factors we must consider:

There is a wide range of tests we can use to measure athletes’ physical qualities.

The table below provides a summary of the different tests we can use to measure muscular strength, agility, muscular endurance, muscular power, aerobic capacity, flexibility, balance and stability.

If you want some guidance on how to conduct the tests mentioned in this article, be sure to check out our articles for each one.

If you quote information from this page in your work, then the reference for this page is: Shaw, W (2021). Fitness tests for athletes: what to test and how to measure. Available from: https://sportscienceinsider.com/fitness-tests-for-athletes/ [Accessed dd/mm/yyyy].