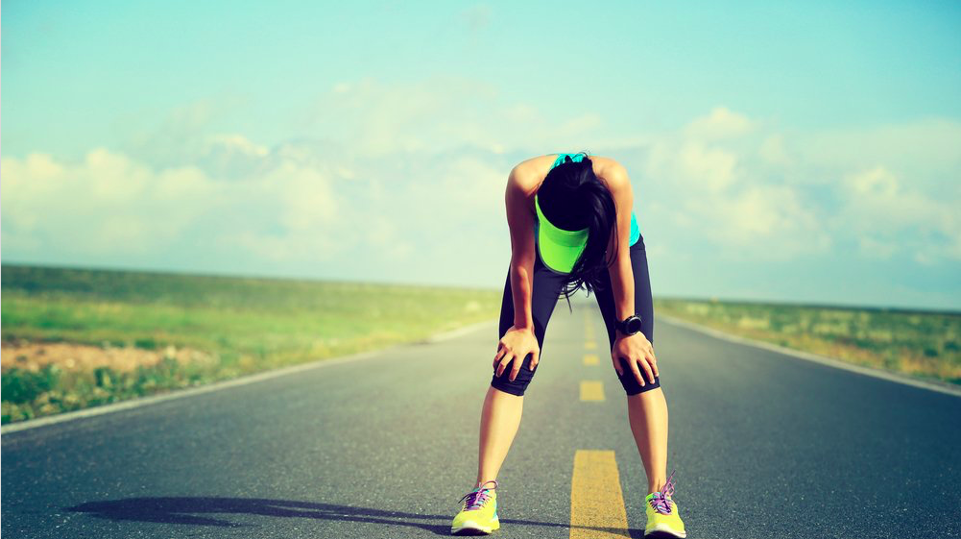 In this article, we’ll cover what oxygen debt (E.P.O.C) is, what its symptoms are, why it occurs, its effect on exercise and implications for training.

What is Oxygen Debt?

A term first coined almost 100 years ago, ‘oxygen debt’ simply refers to the increased volume of oxygen consumed during the recovery phase following exercise that is used to repay the oxygen deficit.

The oxygen deficit is what occurs at the beginning of exercise in the time taken to reach steady-state – this is when we consume the amount of oxygen needed to support the given intensity of our exercise.

Although we increase our oxygen consumption, our body’s response lags behind what we need at that moment in time. During this deficit period where our energy requirements outweigh the amount of energy we can produce from oxygen we must rely on our phosphocreatine reserves and anaerobic respiration.

To avoid any confusion, this is still referring to the same physiological processes, which is why we often see these terms used interchangeably. But, perhaps we should move away from this, this is because each term associates itself with different researchers and their unique hypotheses, and therefore they ultimately have different interpretations of the same topic – something I will discuss in more detail later. This is why I feel it’s important to use the more up-to-date phrase – EPOC, and this is what I will continue to refer to throughout this article.

So, during exercise we use more oxygen and this is necessary to support the increased energy requirements. At the end of exercise, the amount of oxygen used remains higher than normal and slowly decreases before we reach homeostasis, our internal state of equilibrium.

Imagine reaching your destination after a long drive, the car is parked and the engine has been switched off. However if you were to check, you would find that the car’s engine has stayed warm, at least for a period of time anyway, before it gradually cools to reach its resting temperature. It is this very same concept that we experience in our bodies during the recovery from exercise.

What are the symptoms of EPOC

Whether we have just ran a marathon or more simply, sprinted after our morning bus, we have all been left hot and bothered, with our hearts racing and gasping for breath. All of these sensations are thanks to EPOC.

Why does EPOC/oxygen debt occur?

We now know what it is and what it feels like, but why does EPOC happen? Well, there are in fact a number of mechanisms responsible for EPOC, and these are incorporated into two main stages of the recovery process.

1) The initial decrease in the amount of oxygen used, which occurs rapidly – this is the fast component. However, there is also 2) a more gradual process which can last for a number of hours – the slow component!

Let’s see how they differ:

The main function of this component is to replenish our energy sources; this happens through the resynthesis of ATP and Phosphocreatine. While almost 70% of these stores can be replenished within 30 seconds, this process typically takes around 2-3 minutes and uses up to 4 litres of oxygen for complete restoration.

The slow component refers to processes that are still lingering during the hours after exercise, and some report that these can last for up to 3 days in some scenarios. This is so that the body is able to support the following processes below:

There are a few processes that explain why we keep consuming oxygen long after exercise has finished. These include:

What is the effect of exercise intensity and duration?

EPOC is not always the same, in fact, both the duration (how long we continue to use more oxygen) and magnitude (the total increase in oxygen use) of EPOC is highly variable.

Now, there are a few reasons why this is the case.Some of the reasons relate to the individual, such as their training status and sex, but, the effects of these seem to be minimal. Some of the largest influences on EPOC lie within the exercise we perform, especially the type of activity, how demanding it is and how long it lasts.

The intensity of exercise is said to have the largest influence on EPOC, in fact, exercise intensity has shown to explain up to 5x more of the EPOC than the exercise duration or total work completed. As you would expect, as the exercise intensity increases, so does both the magnitude and duration of EPOC. Interestingly, the increase in the magnitude of EPOC seems to increase more rapidly at higher intensities, therefore producing the steep curve shown on the graph below.

The length of exercise also influences the duration and magnitude of EPOC. This is slightly different to the exercise intensity, because the duration of exercise and the total amount of EPOC increase at a similar rate, establishing a more linear relationship. Although, this relationship only seems to become more apparent at higher intensities, typically beyond 50-60% of VO2 max. For example, the graph below shows an individual exercising at 70% of their VO2 max for 80 minutes and therefore produces a linear relationship!

Now the effect of the type of exercise performed on EPOC is less clear and certainly requires further research. There is very little difference when we compare aerobic exercises, such as running and cycling. Whereas heavy resistance training and high-intensity interval training does seem to produce a larger EPOC in comparison to aerobic exercise, suggesting that exercise performed near maximal effort is likely to produce a greater EPOC.

What is the impact of training on EPOC?

It has been shown that the time taken for trained individuals to recover to resting levels is quicker than those who are untrained. Although, this is extremely difficult to test. We can show this by comparing Mo Farah to your typical couch potato.

What would happen if we asked them both to run at the same speed during our test? Well, Mo would hardly break a sweat, but more importantly our other participant is probably near breaking point. Clearly not a very fair test, this is because they are not working at the same relative intensity!

So surely we can just get them to run at the same relative intensity, so that they are both comfortably running for a certain set distance. Well, unfortunately our couch potato is going to be considerably slower and therefore take a lot longer to do this. And, as we have just discussed, the longer we exercise, the bigger the EPOC! So, this is why comparing EPOC between different athletes can be very tricky!

How can I incorporate EPOC into my training?

To confuse things even further, you may come across another phrase used to describe EPOC – the ‘afterburn effect’, which many have branded as the ‘magic secret for fat loss’. Well, consuming extra oxygen does burn more calories, so it does hold the potential to promote weight loss – because if you consume less calories than we expend, then you will lose weight.

However, as an athlete would it be sensible to program our training around EPOC?

I would argue, no. And I put this down to two key reasons. First of all, it’s difficult to measure accurately outside of a lab, and secondly, do we really want to program our training around the amount of calories you burn? If performance is your primary outcome then the best way to achieve this is targeting the physical qualities that underpin your sport. So while EPOC is something to be aware of, and may be useful to inform our nutrition and ensure we re-fuel appropriately, this isn’t something I would specifically try and exploit within my training.

S&C coach who has provided support for both amateur and professional athletes working across cricket, netball and boxing programmes.

Also completed an Industrial placement year within a professional football club as a Sports Scientist and is particularly interested in physiology, athletic development and maturation.